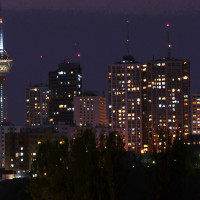 Tehran, the Capital of Iran, is located on the south hillside of the Alborz mountain range with the height of 900 to 1800 m above the sea level.

Tehran climate is greatly defined by its geographical location surrounded by the mountains in the north and by desert in the south. Accordingly, the north of Tehran enjoys a cold and arid weather but the south is largely warm and arid..

Tehran consists of three parts as “Kan“ , ”Markazi“, and “Aftab“; three cities named “Tehran“, “Bomehen“, ”Pardis”; and four rural districts. Demonstrating the traditional and modern architecture, Azadi square symbolized Tehran in the past and Milad tower plays this role, at present. As the capital of Iran, Tehran is a populous city and one of the most significant urban centers in the world experienced the modernity before the other cities of Iran.

Placed in a large area, Tehran is one of the biggest, most significant metropolitans in the world. In other word, it is the center of all affairs, government, politics, economy, culture, work, commerce, history, science, industry and production and it is why people are mostly inclined to immigrate to here and the population is continuously increased.

Locating on the hillside of Alborz mountain chain and near Damavand, the highest volcanic peak of Iran, Tehran embraces the unique attraction and landscapes where one of the most important historical attractions is placed. Tehran residents speak in Persian standard language. Different religious groups live together in Tehran.