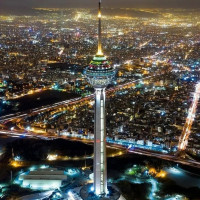 Milad tower, a great complex including various parts of technical and cultural varied structures is one of the unmatched tourism centers in Iran. This tower in 12 floors and as the highest telecommunication tower in Iran is visible from every district of Tehran. The construction of this tower lasted 11 years and finished in 1387 SH and has been known as the symbol of Tehran. Iranian–Islamic architecture of this tower and its octagonal structure are the interesting and sensible points of this tower architecture.

Milad Tower usages include facilitating the wireless communication in Tehran, optimizing the radio and television coverage, digital TV infrastructure, meteorology, traffic control and tourism. Milad tower  has  been constituted of different parts as follows: tower’s lobby (the entrance and trade center of tower), body and the vertex of structure (the 6th tallest telecommunication tower of the world), Municipality Museum (donative from Tehran municipality to Milad Tower), tower’s cafeteria (the cafeteria of the tower’s vertex), celebrities museum (the historical figures statues), revolving restaurant (the largest revolving restaurant of the world), an overlooking terrace (a terrace with the landscape of Tehran city), special restaurant (a restaurant over Tehran city), sky dome (a glass dome at the top of city), exhibition site and the antenna on the top of tower vertex (Milad tower’s telecommunication antenna).