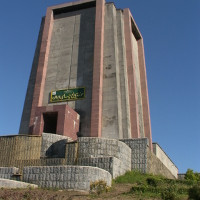 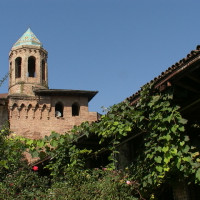 Lahijan has been known as the “bride of Iran’s cities”; One of the oldest and biggest cities of Gilan hosting so many tourists every year.  It is about 45 km distance from Rasht, the center of Gilan Province and placed in the east of this province. Lahijan constitutes of two districts, two cities, seven rural districts. It has more than 168829 poulation.

Lahijan is also known as the "City of Tea". Tea in Iran was cultivated for the first time in Lahijan and then it was spreaded from there to the other regions of southern coasts of Caspian Sea. Haj Mohammad Mirza Kashef al-Saltaneh was the first person who grew tea in Lahijan whose house, located in Lahijan on a hill overlooking the tea gardens, is today transformed into the Tea Museum.

Given to the influences of the mountainous climate of Alborz and Caspian Sea, the climatic conditions in Lahijan is temperate and humid.

One of the main recreational centers of Lahijan is tele-cabine or Baam-e Sabz (meaning green roof). You can reach to the summits using tele-cabine and watch the attractive city landscape from obove. Sheytan Kuh Waterfal in the east of Lahijan is another natural attraction of this city.

One of the most attractive parts of the city is Lahijan Pool in the east. There is a small island in the center of this pool which is connected to the southern section of the pool through a relatively long cement bridge.

Soostan Lagoon is another natural attraction of Lahojan. There is an interesting flora around the lagoon including tall trees, paludal plants and canebrake giving a beautiful appearenc to this place. The lagoon is the habitat of various birds and aquatic.

Established in the period of Fath Ali Shah, Akbarieh Mosque is among the main historic attractions of Lahijan. Golshan Bath has also remained from that time. Lahijan Central Mosque is another historic building which is, according to the evidence, related to the 9th AH century.

The Tomb of Sheikh Zahed Gilani, the famous mystic and the master of Sheikh Safi al-Din Ardabili, in Sheikhanevar village is also among the historical attractions.

Chicken and plum, Fensanjan vegetable stew and Gilaki Shish Andaz are the most delicious and famous local foods, however, the first place has still occupied by tea and cookies.