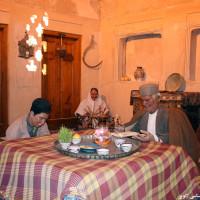 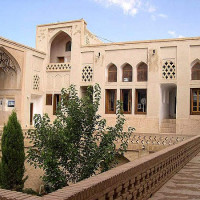 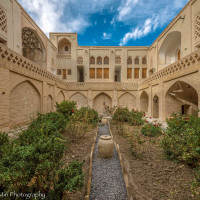 Pirnia dynasty was among the famous families in Qajar period that raised some great men. The great ancestor of this family is Mir Abd ol-Vahab. His son, Moshir ud-Dole was an authority in time of constitutional age and also one of his grandchildren was Hossein Pirnia who became the member of parliament, university professor and the establisher of Economics Faculty in Tehran University. Other grandchildren of him also occupied the main governmental posts of Qajar and Pahlavi periods.

The legacy of this family is placed in Naein city somewhere close to the Jama Mosque of this city. A house that was previously owned by the ruler and inherited to Pirnia family in Qajar period. Some years after the Islamic revolution this historical house was inscribed on the list of Iran National Heritages and it has recently been converted into the Ethnography Museum of Naein. One of the best samples of traditional and historical houses in Naein is this one built in Safavid architecture style.

One of the main features of this house is its delicate and beautiful decorations including stucco and painting in form of wall decorations. These motifs include plant, geometric and animal patterns. The famous ancient Iranian stories such as Khosrow and Shirin were depicted on the walls by the stucco technique. Like other original Iranian houses, Pirnia mansion consists of different parts like corridor, the main mansion or Shahneshin, Hashti (vestibule) and green gardens.

Today, the visitors can see many different materials in the Ethnography Museum of Naein from medicinal herbs to weapons and beautiful wares. A part of the museum rooms is devoted to the exhibition of historical cloths related to different times. In addition to visit the museum objects, visitors can buy Naein souvenirs from the handicrafts shop of the museum and rest in tea-house located close to the museum.

In order to reach Pirnia house, you have to leave Isfahan for Naein. The house is placed in Jama Mosque street, in front of the mosque and it is open to pubic visit every day, except for Mondays and official holidays.